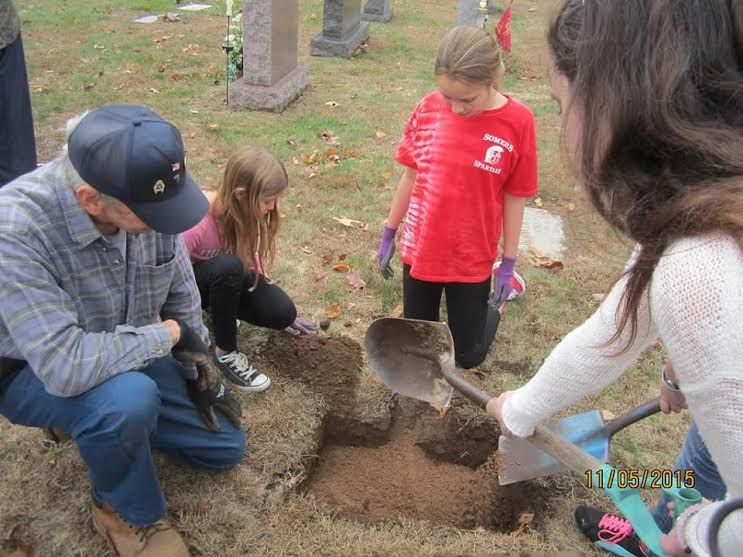 Veteran Ed Mayer looks on as Mabelle B. Avery Middle School students Katelyn Martello, Grace Lessard, and Kylie Raymond use sand to raise a veteran’s grave marker in Somers Center Cemetery in Somers on Nov. 5. The students are members of the Student Community Involvement Team, which was volunteering in honor of Veterans Day.

SOMERS — American Legion Post 101 got some big help on a much-needed project from a group of local students recently in honor of Veterans Day.

Sixteen students from the Student Community Involvement Team at Mabelle B. Avery Middle School helped Post 101 legionnaires raise and re-set the sunken grave markers of 20 veterans in the Somers Center Cemetery at 81 Battle St. on Nov. 5.

McCaffrey, a Navy veteran, said it meant a lot to him and his fellow veterans at Post 101 to see young people interested in helping and learning about veterans.

“Most of today’s youth are too busy in the outside world to focus on what veterans have done for the country, so seeing this type of volunteerism is very refreshing,” he said.

Diane Jennings, a co-advisor to the Student Community Involvement Team, said the idea came when the group’s other advisor, Jean Mandirola, heard about students cleaning the markers in Arlington National Cemetery in Arlington, Virginia.

The group approached McCaffrey in late September about possibly cleaning veterans’ headstones in the Somers Center Cemetery in honor of Veterans Day, but after the post was unable to secure water from the Fire Department, McCaffrey suggested they help raise the markers instead.

Jennings said the students enjoyed working with the veterans, most of whom had served in the Korean, Vietnam, and Persian Gulf wars. She said it was also very educational, as the veterans explained to the students what different symbols on the markers meant and what wars the people fought in. She said they also shared details of their own service with the students.

“It was very, very meaningful for our students,” she said.

Jennings said the group plans to go back in the spring and continue the project in advance of Memorial Day.

The S.A.V.E. Club located all the towns’ memorials, with the assistance of several town officials and members of the historical society to track them down. Once the group located all the memorials, members did research on their purpose and history, transcribed all of the plaques and engravings, while also taking pictures and noting their locations.

To see the statewide listing, click on the link below:

The Service and Volunteer Efforts (S.A.V.E.) Club has been established at Mabelle B. Avery Middle School for several years. The approximately 35 members meet twice a month to discuss community service projects to benefit the school, the Somers Community and Enfield Loaves & Fishes Soup Kitchen. This year S.A.V.E. worked with the Scantic River Watershed Association to clean up the Quality Avenue River and River Trail. The projects done for Veteran's Day included creating original cards to be sent to Veterans as well as creating a Somers Veterans' Memorials page that is in the process of being added to the Connecticut State Veterans' Memorials Webpage. Somers had no presence there before. S.A.V.E. worked with Enfield Loaves and Fishes on a Thanksgiving Food Drive and the soup kitchen this past November helping to prepare all of the food and to  decorate the hall for their Thanksgiving feast. S.A.V.E will also be working with them in preparing for their Christmas celebration. In the Spring, a 4-week Dairy Drive is planned at the school as well. Mabelle B. Avery School also participates in the Rachel's Challenge Program, which is designed to help students develop positive character and kindness through assemblies, classes and community service projects which will be led by the S.A.V.E. students. S.A.V.E. will also be working with the Association for Student Democracy members on a Spring Prom for the Somers Senior Citizen Center. These are just some of the activities that S.A.V.E. members will be doing throughout the year.